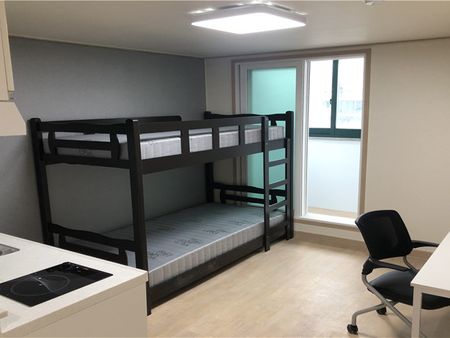 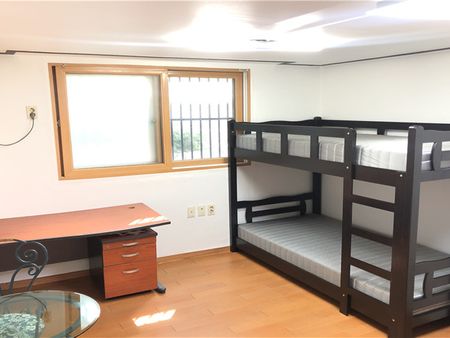 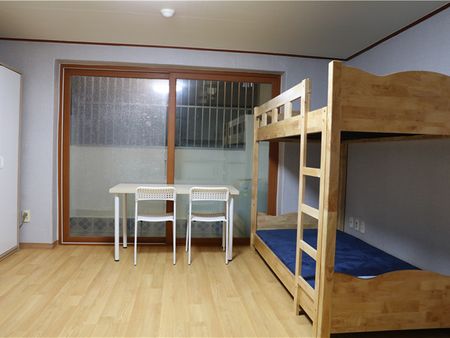 Feel at home in this incredibly diverse, fast-paced, and interesting city with student accommodation from Student.com.

Our student apartments in Seoul are off-campus housing options that are located within easy reach of university campuses, city shops, restaurants, and public transportation.

You can choose your favourite from our cheap apartments, whether it is a shared or private room (often called Goshiwon in South Korea). Our apartments come equipped with all the amenities and convenience you need for comfortable student living.

To learn more about the student housing we offer, give us a call. Or, if you prefer to send us a quick message, we have a live chat feature in the bottom right-hand corner of this page.

Get to know Seoul

South Korea might not be at the tip of everyone’s tongue when it comes to student destinations. However, the country’s capital continues to climb up the rankings of the world’s best student cities. Seoul was tied with Tokyo as the third-best city for students in the world in the QS Best Student Cities 2022 global rankings, behind only London and Munich.

With a thriving economy, a vibrant culture and heritage, state of the art technology, stunning architecture, and refreshing nature, Seoul is now one of the world’s best cities for a high-quality student experience.

A blend of old and new

Seoul is a vibrant and exciting city that manages to deftly fuse ancient history with ultra-modern design and technology. It is a fascinating blend of old and new from modern skyscrapers and neon lights to Buddhist temples, palaces, and pagodas.

Located on the Han River (Han-gang) in the northwestern part of the country, Seoul is a historical city. The earliest historical mention of the city was in the 1st century BCE. And while it is a high-tech hub of innovation that is blazing into the future, the city still feels the need to hold on to its past and heritage and does so well.

Some of the city’s magnificent palaces, which are quite appealing to the eyes and provide an artistic view of the surroundings, have been restored to their former glory. Changdeokgung Palace, a UNESCO World Heritage Site, is an excellent example of authentic ancient architecture that has been preserved to demonstrate the rich history and culture of Seoul.

Another thing that has been preserved is the city’s landscape, which adds to its wide range of tourist attractions.

An attractive city for tourists

Seoul is also quite picturesque and naturally beautiful, with large mountains, narrow coastal plains, and small valleys. This, along with its dry winters and hot and humid summers makes for great outdoor adventures.

Explore Mount Nasmasan and its surrounding Namsan Park, the largest park in Seoul. The 860 feet high peak in the Jung-gu district of south-central Seoul is home to many species of trees, plants, and animals, and is well known for its beautiful walking trails.

There are also several large green spaces, which further boost the city’s profile as a great destination for nature buffs.

However exciting of a city Seoul is, traffic is not one its strengths. It’s notoriously heavy as road transport facilities have not been able to keep up with the demands of a large and expanding population.

But for an ancient city, it has a good road system thanks to the construction of two dozen bridges across the Han River, a network of highways across the city east-west along the river and north-south around the city centre.

Also, the implementation of an extensive subway system, and a circular road around the city that connects it with suburban new towns and satellite cities, is providing some relief to the heavy traffic of the inner city.

Though not a traditional destination for international students, Seoul’s student experience is rated highly among current and past students.

The city was ranked as the 3rd best student city in the world in the QS Best Student Cities 2022 ranking.

The safe, diverse, thriving, and convenient nature of the city makes for a great student experience. There is a lot for students to explore, see and do.

The city’s work hard and play hard culture is quite intense lending to an energy-filled, fast paced lifestyle that often suits great for students.

Seoul offers a good balance between education and entertainment. The nightlife is good with plenty of karaoke bars, nightclubs, and restaurants, plus it’s safe, and you won’t have to empty your pockets to have fun. The availability of a wide variety of food and eateries, and excellent dining conditions, make for great dinner dates.

If you don’t find traditional Korean food such as Kimchi or Bibimbap delightful, you’ll likely find a taste of your homeland in Seoul. The city’s food scene provides an array of mouth-watering international cuisines including Indian, Mexican, Italian, Chinese, Thai, British, French, and American.

There are large department stores and shopping centres south of the Han river in Gangnam, the area whose name has become world-famous thanks to the Psy hit song Gangnam Style.

But to experience Seoul’s culinary traditions and culture firsthand, take a trek to Tongdaemun and Namdaemun north of the river. These markets are unique, extensive, and filled with numerous individually owned traditional shops.

There are some other traditional markets where you can catch a glimpse of the country’s traditions. The Seoul Folk Flea Market is also famous for its diverse street food options and an array of second-hand antique clothing. With over 100 years of history, the Gwangjang Market is Korea’s first traditional market and offers a colourful array of delicious traditional Korean food at reasonable prices. Tongin Market has a great lunchbox system where you go to a coin store to buy a tray and some coins, and you can then use these coins to buy food items to fill your tray from the different vendors.

Where to study in Seoul

Seoul has emerged as a powerhouse student city. One of the primary reasons is the level of higher education it provides. The city has no fewer than 21 universities that were featured in the 2022 QS World University Rankings.

Best universities in Seoul according to QS rankings are:

Founded in 1946 by the merger of ten higher education institutions, Seoul National University (SNU) is considered the most prestigious Korean university.

The institution also has partnerships and exchange programs with over 700 academic institutions in 40 different countries worldwide.

The first university funded and administered solely by Koreans, Korea University was founded by the Treasurer of the Royal Household Lee Young-Ik in 1905 as Bosung College.

Korea University is home to about 30,000 students from all over the world enrolled in eighteen colleges and divisions, and eighteen graduate schools.

The institution has highly regarded professional schools of law, medicine, engineering, and business administration, as well as the Korea University Hospital.

The first Western institution of learning in Korea, Yonsei University was established in 1885.

It offers comprehensive undergraduate and graduate programs along with extensive research and medical facilities to around 30,000 students across four campuses.

The leading university that is located in the heart of Seoul is a major research institution making significant contributions in the fields of medicine, chemistry, human health, engineering, and the humanities and social sciences.

How do I apply for student accommodation in Seoul?

Apply for student accommodation in Seoul by using our website’s filter feature and mapping tool to compare the student housing we list by things like price and location.

Once you’ve chosen the room type that you want, click ‘Enquire’ or ‘Book Now’. One of our booking consultants will then call you to answer your questions and take you through the next steps of the booking process.

What types of rooms are available in the apartments for rent in Seoul?

We currently offer two types of rooms in Seoul:

Shared Rooms: This is what most of the properties we list offer. You’ll share a bedroom with a roommate, and the bathroom and kitchen are also shared.

Private Rooms: This option will give you a private bedroom just for yourself. Bathroom and kitchen are shared with other students. Korea No.3 Residence offers private rooms.

Are bills included in the rent?

In most cases bills are not included in your rent.